¿No estoy yo aquí que soy tu madre?
(Am I not here, I who am your mother?)

Nawas now offers pilgrimages to Mexico honoring Our Lady of Guadalupe. The basilica in Mexico City is the most visited Catholic pilgrimage site in the world and the world’s third most-visited sacred site. The shrine plays an important role as a national symbol of Mexico. 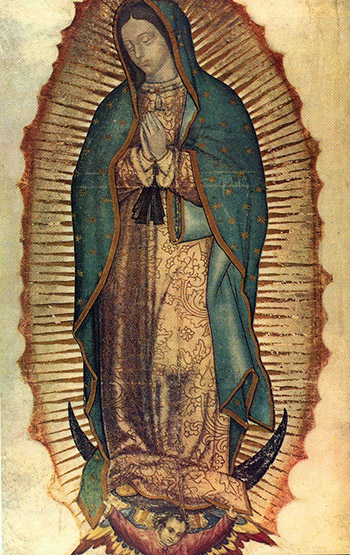 The Apparitions on Tepeyac Hill

According to tradition, the Virgin Mary appeared four times to St. Juan Diego, a poor Aztec man who converted to Christianity. He experienced his first vision on the morning of December 9, 1531 on Tepeyac Hill (now part of a suburb of Mexico City). He was on his way to Mass when a woman dressed as an Aztec princess appeared to him. Speaking to him in his native language, she identified herself as the Virgin Mary.

She requested that a chapel be built in her honor on the spot where she appeared. So Juan Diego went to his archbishop and told him of the apparition. However, the bishop didn’t believe him. Eventually, the bishop demanded a miraculous sign before he would construct a shrine. Thus the Virgin Mary appeared to Juan Diego again and told him to come back the next day and she would give him a sign.

At the same time, Juan Diego’s uncle fell ill. Because he needed to tend to his uncle, Juan Diego was unable to return to the hill. Feeling ashamed, he tried to avoid the hill but Our Lady appeared to Juan Diego anyway. She said,  “¿No estoy yo aquí que soy tu madre?” (Am I not here, I who am your mother?)”

Further, she told him his uncle would recover and instructed him to gather flowers from the top of Tepeyac Hill. Juan Diego did as she asked. On the typically barren hill, he found Castilian roses blooming there.

According to the story, the Virgin arranged the roses, which were not native to Mexico, inside Juan Diego’s cape or tilma.  He returned to his bishop on December 12. When he opened his cape, the roses fell to the floor revealing the image of Mary imprinted on the inside of the cloak.

As a result, the bishop had a small chapel quickly built on Tepeyac Hill and put Juan Diego’s miraculous cape on display. Further, the archbishop of New Spain encouraged devotion to the image of Mary at the chapel. A shrine has been on the site since at least 1556.

Devotion grew and Our Lady of Guadalupe is credited with ending a deadly epidemic of hemorraghic fever that decimated Mexico City in 1736. As a result, she was proclaimed patroness of Mexico City in 1737. By 1746 her patronage was accepted throughout New Spain. In 1754 Pope Benedict XIV granted her a feast and mass for December 12.

Accepting of All Peoples

According to religious scholars, Our Lady’s appearance to Juan Diego as an Aztec like himself is a powerful reminder that the Virgin Mary, like God, accepts all peoples.

Our Lady of Guadalupe Pilgrimages

NAWAS is pleased to offers pilgrimages to Mexico including visits to the Basilica of Our Lady of Guadalupe. We also feature pilgrimages to the Marian shrines of Fatima and Lourdes. In addition, we can custom design any program you’d like to promote. 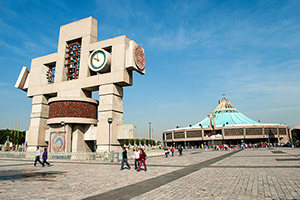 Visit Mexico City and the Basilica of Our Lady of Guadalupe … tour the archaeological ruins of Teotihuacan … admire the ornate Cathedral and the Rosary Chapel in Puebla … visit Tlaxcala, the “Lourdes” of Mexico, and the Shrine of San Miguel del Milagro … marvel at the colonial architecture in Taxco.