St. Petersburg, City of the Czars

With its gilded domes, ornate pastel palaces and iconic cathedrals, St. Petersburg’s Imperial grandeur is a spectacular sight to behold. Located on the Eastern European shore of the Baltic Sea, the city of Peter the Great is Russia’s cultural heart and a showcase of opulent architectural gems. Its location is ideal for visiting as part of a Baltic cruise. Most programs include an overnight shipboard stay, so you have two days to explore this magnificent city and its wealth of attractions.

Peter the Great founded St. Petersburg in 1703 and for centuries it was the capital of the Russian empire. Sitting on the banks of Neva River, the City of Czars is built on 100+ islands and linked by canals lined with Italianate mansions and arched bridges. Thus, it’s no wonder that the city is often referred to as the “Venice of the North.”

St. Petersburg is also famous for its White Nights when in the summer the sun never sets. Therefore, from late May to early July you can stroll the city late at “night” and it’s almost broad daylight.

There is so much to see in St. Petersburg, here are but a few of the top, don’t-miss sights to see during your cruise stop.

By far the number one sight in St. Petersburg is the prestigious Hermitage Museum. The vast complex along the Neva River holds a staggering 3-million-piece collection, the second largest after the Louvre. Catherine the Great founded the museum after she began collecting art from European aristocrats.

Today the Hermitage includes several sites; the regal, sea-green Winter Palace houses the main collection. Here you’ll be mesmerized by the treasures of arts and antiquities including Greek and Roman artifacts and Western European fine art. You’ll also see the opulent 18th and 19th-century state rooms of the Romanov family. Across the Palace Square in the crescent-shaped General Staff Building, you’ll see the famous Impressionist and post-Impressionist masterpieces by Van Gogh, Matisse, and other artists. 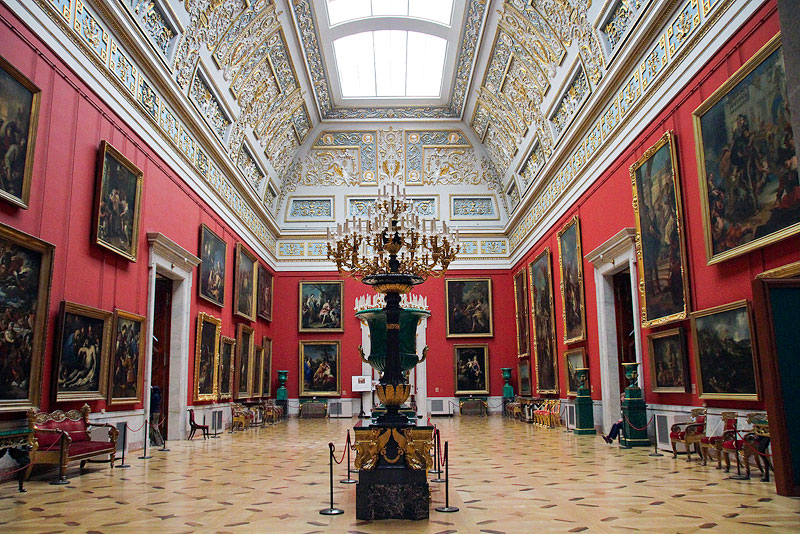 The Hermitage Museum in St. Petersburg

Peterhof (Petrodvorets) also tops most visitors’ must-see lists. After visiting Versailles, Peter the Great wanted to one-up Louis XIV. So he commissioned this massive palace and park in the suburbs for his summer residence. Later the Czar’s daughter, Empress Elizabeth, ordered an expansion and added the spectacular Grand Cascade of 64 fountains on a series of terraces. In all, Peterhof has 1500 acres of formal gardens and parks and 173 fountains. Sadly, during WWII the Nazis pillaged Peterhof, but the city quickly restored it to its former grandeur and opened it to the public in 1945. 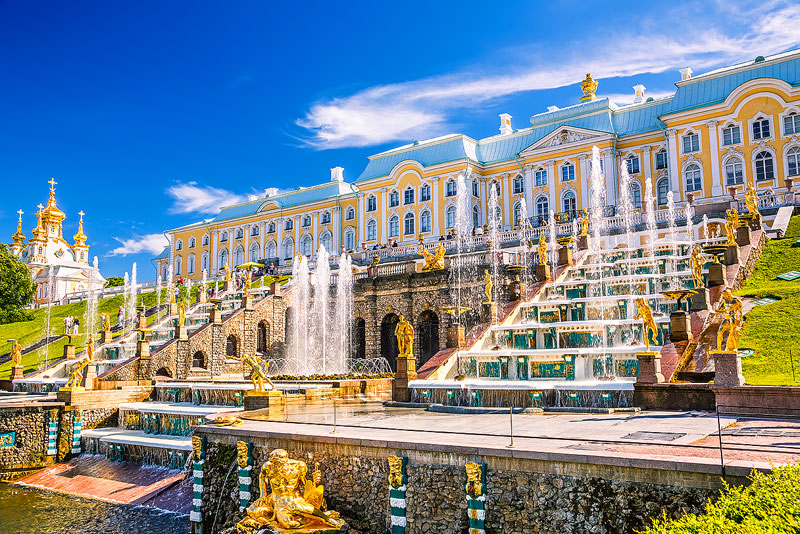 The Grand Cascade of Fountains at Peterhof, just outside of St. Petersburg

The Baroque Catherine’s Palace at Tsarskoye Selo is another testament to the Czars’ extravagance. Named after Peter the Great’s second wife, the opulent palace features elaborately decorated blue-and-white facades, plenty of gilding, and extensive gardens. His daughter, Empress Elizabeth, used it as her summer home and had it redesigned on a scale like Versailles. Do you sense the Romanovs had a rivalry with France? A whopping 220+ lbs. of gold decorates the palace exteriors, and the interior is just as grand.

Visitors typically see the “Golden Enfilade” of rococo style state rooms designed by the Italian architect Rastrelli. You’ll marvel at the spectacular Great Hall, also known as Hall of Light, which is nearly 3,300 sq. ft. and spans the width of the palace. Even more impressive is the renowned Amber Room covered in panels of amber mosaic. During WWII the Germans dismantled and moved the panels to Germany and they’ve never been found. In 1982, restorers began recreating the room from photographs. It took 20+ years and over $12 million, but the restored room is incredible to see. 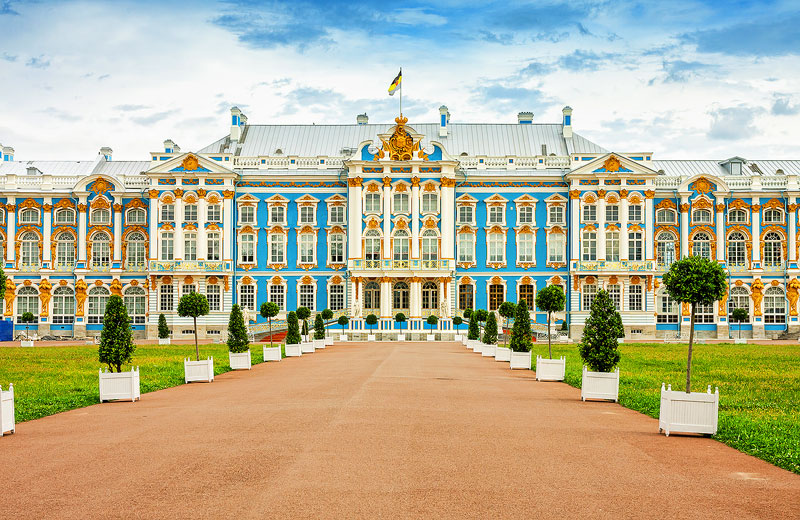 The flamboyant Catherine’s Palace in Pushkin

As the first structure built in St. Petersburg, the Peter and Paul Fortress encompasses three centuries of history. It never saw military combat yet it served as a military base. It also has an infamous history as a prison and political prisoners were executed here. Later, scientists used it to conduct experiments for rocket technology. Today the Peter and Paul Fortress is a museum of history with beautiful gardens and stone paths. The 18th century Saints Peter and Paul Cathedral, the burial place of most of the Romanov emperors and empresses, is the star attraction. 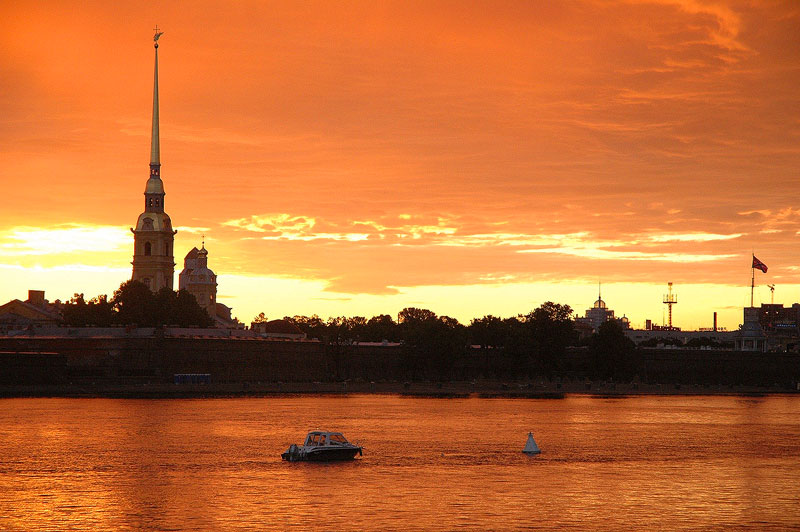 You can see the soaring spire of Saints Peter and Paul Cathedral for miles.

Russia’s imperial capital is one of the world’s most beautiful cities and a splendid display of the Romanov’s love for opulence, ornate architecture, and art. By far the easiest way to visit St. Petersburg is on a Baltic cruise. NAWAS offers a 13D Scandinavia & St. Petersburg cruise tour program which includes an overnight shipboard in St. Petersburg so you can explore this wonderful city. Contact us to learn more.

Let’s Get Started
We’re ready to send you off on the cruise of a lifetime.