The Life of St. Francis of Assisi: Man of Poverty and Peace

When Pope Francis was asked how he chose his papal name, he said he thought about the poor:

…then I thought of Francis of Assisi…for me he is the man of poverty, the man of peace, the man who loves and safeguards creation. 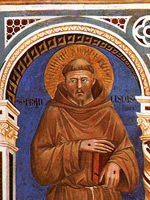 One of Catholicism’s most beloved saints, Giovanni Bernardore, commonly known as Francesco, was a 13th-century monk and the founder of the Franciscan order. Born in Assisi in 1182, St. Francis was the son of a wealthy silk merchant and lived his early life in luxury. After a rather boisterous youth, his experience as a soldier and war prisoner slowly led him on a path to faith. He served the poor and the ill around Assisi and after a pilgrimage to Rome, where he begged for the poor at St. Peter’s, he renounced his former life, took on a vow of poverty, and devoted himself to Christ. In Assisi he restored several ruined churches, among them the little chapel of Porziuncola, one of his primary sources of inspiration.

Francis gained followers and in 1210 Pope Innocent III authorized his new order, the Franciscan Order of Preaching Friars. He later founded the Order of Poor Clares for women and the Order of Brothers and Sisters of Penance. Poverty was central to his character and St. Francis, the Patron of Animals and Birds, believed that nature reflected God. He was also know for his love of the Eucharist.

Near the end of his life, Saint Francis, suffering from several illnesses, received the stigmata. He died October 3, 1226, outside Assisi, reciting Psalm 141(142) – “Voce mea ad Dominum” (with my voice to the Lord). He was canonized two years later by Pope Gregory IX.

Cardinal Jorge Mario Bergoglio of Argentina, upon his election as Pope on March 13, 2013, took the name of Francis in honor of the saint. 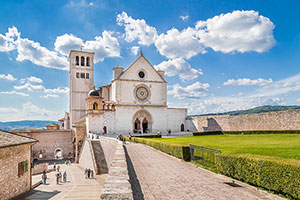 One of the most popular sites in the hilltop town of Assisi today is the Basilica of St. Francis, where the saint is buried in the lower chamber. NAWAS pilgrims can visit the basilica, as well as the Church of St. Clare and Santa Maria degli Angeli, home of the Porziuncola Chapel.

Our Most Popular Pilgrimages

NAWAS offers several pilgrimages including visits to Assisi including:

We can also custom design any program you wish to offer.