Our Lady of Fatima Pilgrimages

In 2017 Fatima celebrated the 100th Anniversary of the Apparitions of Our Lady. Catholics from around the world made pilgrimages to Portugal to celebrate this miraculous occasion. NAWAS helped thousands of pilgrims to visit Fatima for the Centennial and will send thousands more to Fatima this year.

The Miracle of Fatima 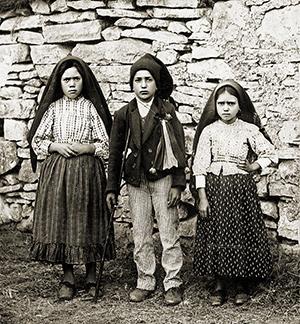 Since 1917, Fatima has been  one of the most important Marian shrines in the world. Beginning May 13 of that year, a luminous figure of  a woman all in white, “brighter than the sun” appeared to three young shepherd children, Lucia Santos and her cousins Jacinta and Francisco Marto, as they were tending their sheep in the Cova da Iria. When Lucia asked her who she was, she said “I am from Heaven.”

The lady  wore a white mantle edged with gold and held a rosary in her hand and she urged the children to do penance, say the Rosary every day and devote themselves to the Holy Trinity in order to bring peace and an end to the world war that was raging at that time.

She urged the children to return on the 13th day of the following month; the children experienced a total of six visits from the apparition, from May to October 13.

During her appearances she revealed that  the children would suffer and that Francisco and Jacinta would go to heaven soon while Lucia would live many years to spread her message. When she made her last appearance on October 13 more than 70,000 people had gathered. As the astonished crowd watched, the sun became different colors and moved toward earth in a zigzag motion that became known as the dance of the sun. This Miracle of the Sun was seen over an area of 600 square miles. 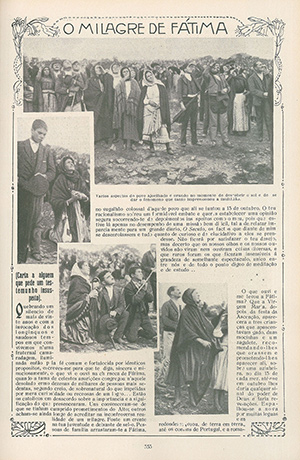 Within three years of the Apparitions, Francisco and Jacinta died during a flu epidemic while Lucia became a Carmelite nun. Pope John Paul II beatified two of the children, Jacinta and Francisco, on May 13, 2000. Sr. Lucia was present for the ceremony. She lived to age 97 and died in 2005.

Our Lady of the Holy Rosary of Fatima

The Blessed Virgin was given the title Our Lady of the Holy Rosary of Fatima based on the apparitions experienced by the three children.

The site of the apparitions quickly became a major pilgrimage center; two million pilgrims visited in the decade after the events of 1917. A small chapel was built and by 1927 the foundation was laid for the present basilica. In 1930 Fatima received official church recognition of the apparitions and pilgrims were granted a papal indulgence. Today millions of pilgrims flock to the site and pilgrimage festivals are held on the thirteenth day of the month from May through October.

Pope Francis traveled to Fatima in 2017 to mark the 100th Anniversary of the Apparitions and thousands of pilgrims traveled in his footsteps with NAWAS for the Centennial celebrations.

When the Holy Father received a statue of Our Lady of Fatima in 2014 he invited the crowd present to meditate on the gaze of Mary. The Pope said of Mary’s gaze,

How many things can be said with a look! Affection, encouragement, compassion, love, but also reproach, envy, pride, even hatred.

“Often,” he added, “the look says more than words, or says what words cannot or dare not say. Who looks at the Virgin Mary? She looks at all of us, each of us…She looks at us like a Mother, with tenderness, with mercy, with love. The same way she looked at the child Jesus, in every moment of his life… When we are tired, discouraged, overwhelmed by the problems, look to Mary.”

Mary confided to the children three secrets. The first was that a “night illuminated by an unknown light” would precede a “worse war” and “The Holy Father will have much to suffer.”  On January 25, 1938 there was an incredible aurora borealis across Europe; this was the year before the outbreak of  World War II.

The second secret involved Russia, which Mary said would “spread her errors throughout the world, promoting wars.”  She went on to reveal that she will come to ask for the consecration of Russia. This prophecy is widely believed to be about the spread of Communism, and Pope John Paul II’s consecration of Russia in1984 fulfilled the prophecy and led to the eventual collapse of the Soviet Union.

There has been much speculation about the third secret. Lucia wrote down the prophecy and gave it to Portugal’s Bishop of Leiria in a sealed envelope, instructing it should not opened until 1960. Since then several popes have reportedly read the prophecy and it is said that Pope John Paul II refused to reveal it because its spiritual message will be overshadowed by the sensationalism surrounding it.

NAWAS offers year-round Marian pilgrimages to Fatima, plus the Marian Shrine of Lourdes:

Plan your pilgrimage NOW to lock in your group space. We can also custom design any program you wish to offer.