The history of the Oberammergau Passion Play dates back to the seventeenth century. In 1633 the Black Plague, also known as the bubonic plague, rampaged through Europe, killing thousands. For months the small village of Oberammergau managed to keep the dreaded disease at bay, mainly because of its remote location in the Bavarian Alps. Unfortunately, the epidemic struck the nearby town of Ettal. 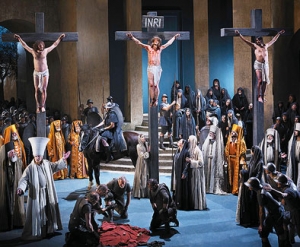 The people of Oberammergau, however, controlled the spread of the disease by keeping close watch and preventing strangers from entering their village. Alas, late one evening, a villager who had been away, homesick for his family, stole back into the town and unknowingly brought the plague to his people. Within a few months 84 villagers had died.

In 1634 the townspeople first performed their Passion Play at Pentacost over the graves of plague victims. Eventually their vow was adopted by their children and their descendants. To this day, the villagers of Oberammergau have kept their promise virtually unbroken.

Today the Passion Play is the most famous play in history. It’s a five-hour musical drama that follows the last five days of Jesus’ life from the time He entered Jerusalem through His crucifixion and resurrection. The 2022 performances will include spoken dramatic text and opera-style singing backed by a full orchestra and chorus. Interspersed throughout will be narrated tableaux vivants (“living pictures”) with motionless actors depicting scenes from Old Testament that act as a bridge between the Old and New Testaments.

Work With An Operator You Can Trust

In 2010, over 16,000 passengers attended the Passion Play with NAWAS and every single one of our customers had a guaranteed ticket without issue! In prior years, many other groups, who chose irresponsible or inexperienced operators, were not so fortunate and had their tours cancelled at the last moment.

NAWAS guarantees Passion Play tickets for all of our passengers. We have guaranteed First Class, Category 1 tickets with seating among the best available. NAWAS has the LARGEST blocks of tickets with arrangements for every performance date.
RESERVE YOUR GROUP NOW »
Click here to get more info on Nawas’ Passion Play 2022 programs
Page load link
Go to Top