St. Columba
& the Isle of Iona

St. Columba and the Isle of Iona

Since the 7th century, pilgrims have been coming to the tiny, windswept Isle of Iona, off the West Coast of Scotland. When St. Columba and his 12 companions landed on the sacred Island on Pentecost Day 563 AD, little did they know that the small Celtic monastic community they established would have such far-reaching influence on Christianity. The holy island is often referred to as the cradle of Christianity in Scotland and remains a place of pilgrimage dedicated to the Virgin Mary.

The Irish monk and his group chose the three-mile-long, wild, rocky isle as a haven for peace and tranquility and the promise of new beginnings. With a mission to bring Celtic Christianity to pagan Scotland, their work helped spread Christianity not just in Scotland but in northern England and eventually through much of Europe.

St. Columba established his monastery on the site of the present-day abbey. Although little of the original monastery remains, there was a small church, monastic cells, and communal buildings. Unlike the Abbey of Iona standing today, the original monastery was austere, with its primary purpose to contemplate God through prayer and learning. After Columba died in June 597 AD, it’s believed he was buried below the small stone chapel shrine connected to the abbey.

Thanks to St. Columba’s fame, his monastery became a center of pilgrimage beginning in the 7th century. From the 8th century, the Isle of Iona was also a leading art center for sculptors, metal works, and manuscript illuminators. Hence, today you can still see some of the beautiful Celtic crosses on the isle. The exquisite Book of Kells, on display at Trinity College in Dublin, was likely made on Iona, along with other illuminated manuscripts.

Later, the Vikings repeatedly raided the island in the early 9th century, killing many of the monks and destroying much of their work. As a result, the majority of the monastic community moved to Kells, Ireland. The monks took some of St. Columba’s relics to Dunkeld in Perthshire, as well as Kells.

Despite the Viking attacks, Columba’s monastery survived until the end of the 12th century. Then around the year 1200, the Benedictine monks, led by the son of Somerled (“King of the Isles”), established an abbey and a nunnery on the site of the original monastery. This tilted the focus away from Celtic Christian toward the Catholic Church. 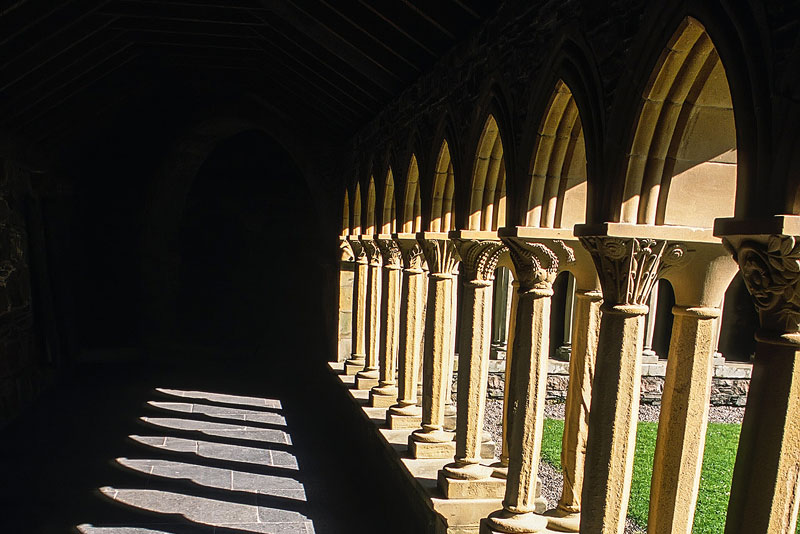 The 13th Century Abbey of Iona

The Abbey of Iona Today

On a rocky area west of the Abbey lies the foundations of a small excavated building. Some believe it to be St. Columba’s cell, where he worked and prayed. Hoever, no actual buildings from St. Columba’s day have survived. During the Protestant Reformation, the Benedictine monastery was dissolved and the buildings lay in ruins for hundreds of years. Then in 1938, Lord George MacLeod formed the Iona Community and restored the 13th-century abbey buildings. Once again, Iona began to thrive as a center of worship and learning.

The Isle of Iona – A Place of Pilgrimage

Today the Benedictine Abbey is known as St. Mary’s Cathedral and it’s home to the Iona Community where its spiritual life continues. There is also an Augustinian nunnery, said to be the most complete nunnery complex to survive in Scotland.

Visitors can still follow the ancient pilgrimage route along the Sràid nam Marbh (“Street of the Dead”), which today ends at the Abbey of Iona, standing on the site of St. Columba’s original church. The “Street of the Dead” runs westward from Iona Abbey to St. Oran’s cemetery, Scotland’s oldest Christian burial site. It’s said that most of the ancient Scottish kings were buried here including Macbeth. 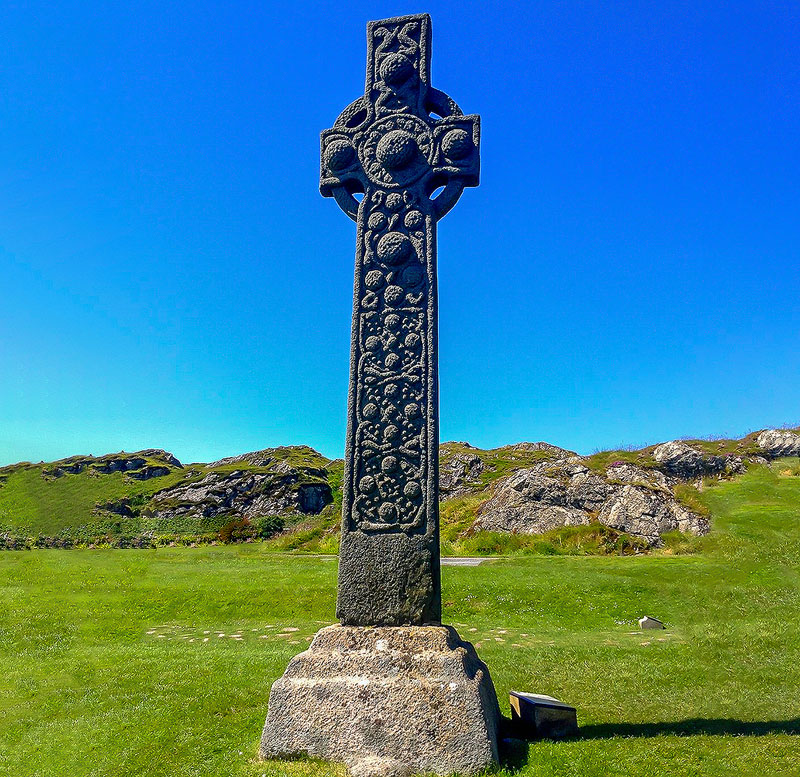 The red granite 14-foot-tall St. Martin’s cross, dating from the 8th century AD, stands in front of the abbey. Although badly weathered, the intricately carved figures on it depict scenes from the Bible: the Virgin Mother and Child in the center, Daniel in the lions’ den, Abraham and Isaac, David and Goliath, and a scene that appears to be Samuel about to anoint David. The other three tall, iconic crosses that once stood near the abbey are now in Iona’s Abbey Museum.

Visiting the Isle of Iona and Abbey

NAWAS features a visit to the Isle of Iona and the Abbey on our 10 Days Best of Scotland program. During your visit of St. Columba’s isle, you’ll have a chance to see the Abbey, St. Martin’s Cross, the Isle of Iona Museum, and explore the grounds around the monastery. Contact us to learn more.