As Christians, visiting the ruins of ancient Ephesus, where St. Paul once lived is both spiritually enriching and a visual treat. The ruins are quite an impressive sight. Indeed, you’ll get chills as you stroll the timeworn marble streets as you imagine St. Paul walking the same path.

Ancient Ephesus played an important part in both world and Biblical history. The wealthy city was a major commercial center and served as the capital of Asia Minor at least twice. Moreover, Ephesus holds great importance for Christians as the city where St. Paul, St. John, and the Blessed Virgin Mary lived for a time and where the Apostle Paul ministered and established a church.

Located near the modern city of Selcuk, Ancient Ephesus was founded in the 4th century BC and has survived earthquakes, fires, wars, and disease. During the time of St. Paul, it was a prosperous port city with a population of about 250,000. There was a harbor, a huge theater, a massive library, elaborate bath complexes, civic buildings, and the magnificent Temple of Artemis (Diana), one of the Seven Wonders of the Ancient World.

St. John established the first Christian community in Ephesus, then on his third missionary journey, St. Paul came to fulfill a promise he’d made on a previous visit. He stayed about three and a half years, preaching the gospel and gaining followers. During his stay St. Paul founded a church that became the head of the Seven Churches in western Asia Minor. It wasn’t long before Ephesus became the third most important city of Christianity in its time, after Jerusalem and Antioch.

While he was in Ephesus St. Paul wrote four letters to the church in Corinth and likely wrote the Ephesians during his incarceration there. While here, he overcame many challenges, struggling with magicians, pagans, and state officials and landing in prison at least twice. He even caused a riot (Acts 19:23–41). Silversmith Demetrius argued that the Temple of Artemis was being threatened by “The Way”—an early Christian movement—and feared the lucrative sales of silver Artemis idols would decline. As the riot involved most of the city, it was very likely the reason St. Paul left Ephesus and returned to Corinth.

Today, when you visit ancient Ephesus you’ll find that the ancient Greco-Roman world comes alive. While the ruins have been under excavation for more than 150 years, archaeologists are continually finding new structures. An amazing 80% of the city is yet to be uncovered! Here are the highlights of what you will see when you visit Ephesus with Nawas:

The Library of Celsus is one of the most beautiful buildings in Ephesus, the best known and most photographed. Built about 117 A.D, the two-story façade boasts Corinthian-style columns and three windows on the second floor. The Ephesus Library was the third biggest library after Alexandria and Pergamum. It could hold 12,000 scrolls, which were kept in wall niches. 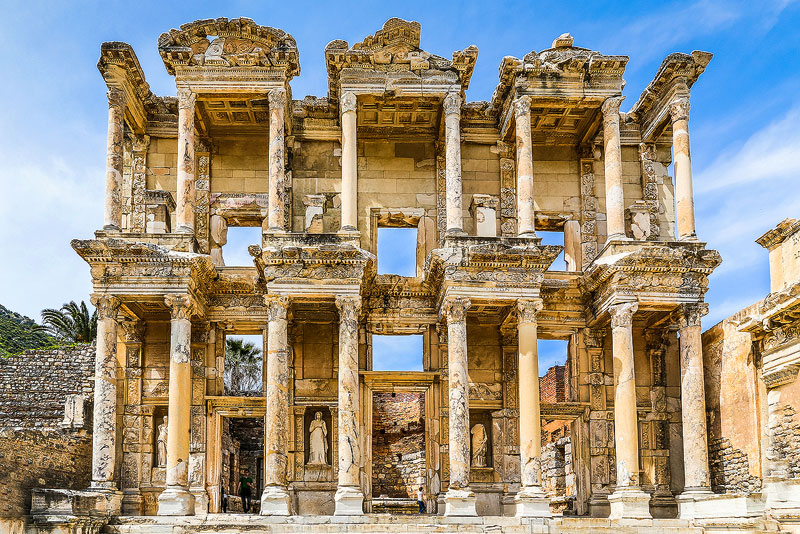 The massive theater held 25,000 spectators and was the largest outdoor theater in the ancient world. This is where the events of Acts 19:23-41 took place after St. Paul spoke out against Artemis and Demetrius started a riot.  When the riot broke out, the Ephesians rushed to the theater, dragging Paul’s traveling companions Gaius and Aristarchus along with them. Today, special concerts are held in the Great Theater. 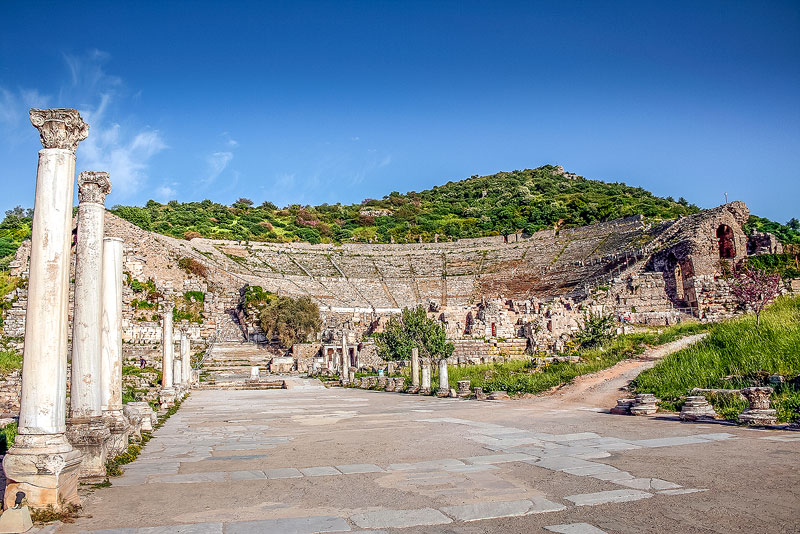 See the Great Theater in Ephesus, site of the Riot mentioned in Acts 19:23-41

The 2nd-century temple is also a major attraction and an architectural marvel. Located along the main path through Ephesus, it was originally built to honor the Roman Emperor Hadrian, but later it became a Christian church.  You’ll see the main arch is supported by a central keystone and it’s finely balanced without mortar. This Corinthian temple is covered with intricately carved details. Medusa wards off evil spirits on one arch and Tyche, the goddess of chance and patroness of Ephesus is on the other. 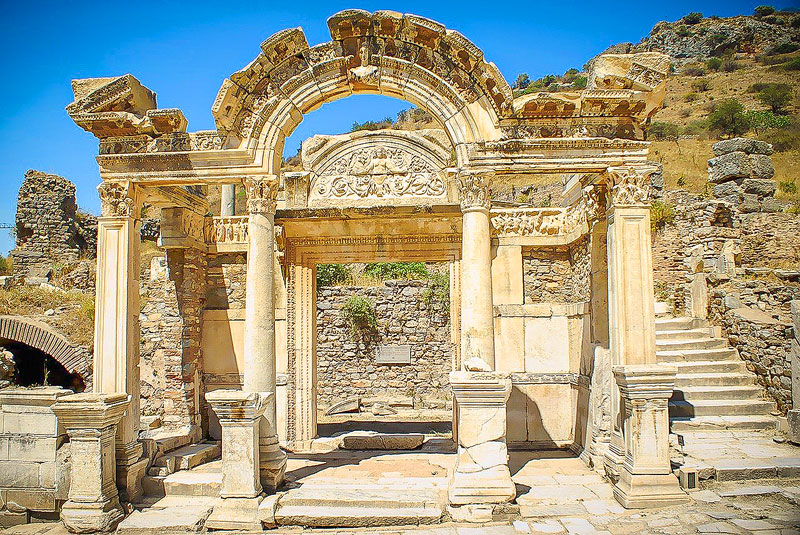 The Corinthian columns of Hadrian’s Temple are intricately carved and well preserved.

Visiting ancient Ephesus is a major highlight of Nawas’ Steps of St. Paul, Biblical Turkey and Greece & Greek Isles plus Ephesus programs. It’s a great stop for Christians wanting to walk in the Steps of St. Paul and get a better understanding of the Apostles journeys. For more information on our Ephesus and St. Paul programs, contact Nawas.

Let’s Get Started
We’re ready to send you on the trip of a lifetime.