Watch the Changing of the Guard
at Buckingham Palace

See the Changing the Guard at Buckingham Palace in London

What is the Changing the Guard

Watching the iconic Changing the Guard ceremony at Buckingham Palace has long been a tradition for visitors to London. The world-famous spectacle marks the point when the soldiers on duty, called the Old Guard, are relieved by the soldiers of the New Guard. It follows the traditional format for guard changing ceremonies at the royal residences that have been going on since 1656 when household troops began guarding the exiled King Charles II.

Up until 1689, the ceremony took place at Whitehall Palace where the monarch then resided. After that, the Court moved to St. James’s Palace. When Queen Victoria moved into Buckingham Palace in 1837, the Queen’s Guard, the name for this elite infantry group, was split into two. Some guard Buckingham Palace while another contingent protects St. James’s Palace, just a five-minute walk away.

What Happens in the Changing the Guard Ceremony

In keeping with the British love for pageantry, the Changing the Guard ceremony is a highly visual event filled with color, music, and spectacle. If you’ve never seen it before, you’re in for a treat. Officially known as the Guard Mounting, it represents the official handover of responsibility for the military security of the Royal Palaces. A lot goes on during the event, so below we’ll explain exactly what happens. 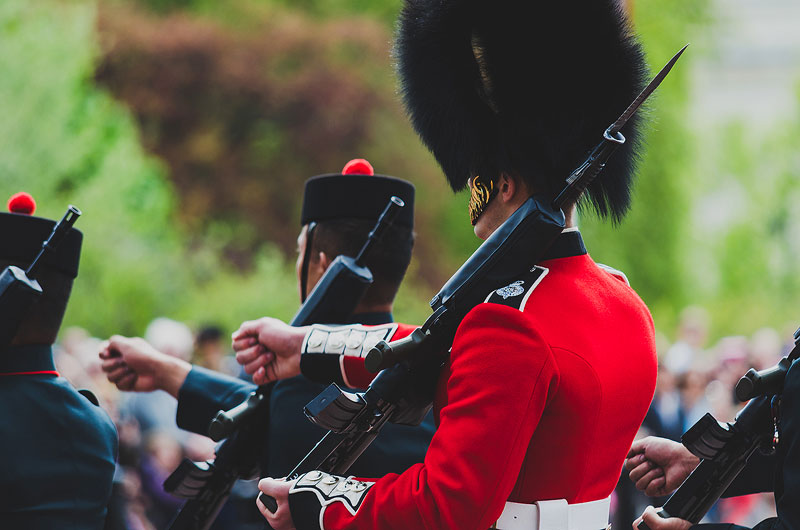 Soldiers marching to Buckingham Palace for the Changing the Guard Ceremony

Attired in their famous black bearskin hats and bright red tunics (muted grey in winter), the New Guard assembles at Wellington Barracks for inspection and the arrival of the Regimental Color (flag). Then, accompanied by a military band, it marches to the Buckingham Palace forecourt.

At St. James’s Palace, the detachment of Old Guards lines up for inspection by the Captain of the Queen’s Guard. Then, sometimes accompanied by a band or drum corps, the unit marches down the Mall toward Buckingham Palace. 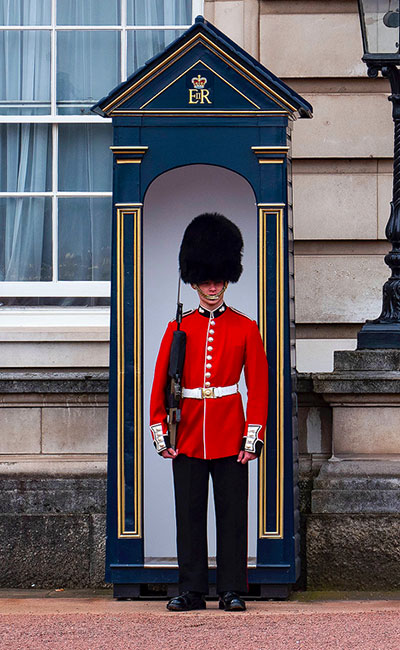 As the band plays the New Guard’s Regimental Slow March, the Old Guard and New Guard salute with their rifles, which is known as Presenting Arms. And then they exchange the keys to the Palace, a symbol representing the transfer of responsibility.

While the music continues, officers of the Old and New Guards parade their regimental colors and salute the Senior Captain with their swords. New sentries go to their posts and a Lance Corporal distributes any special orders. Following the handover, the Old Guard reports to the Senior Captain.

In the meantime, the Regimental Band, which is a full military band complete with drums and both Irish and Scottish bagpipes, plays a music program in the center of the forecourt. While the band does play traditional military marches, you may be surprised to hear show tunes, pop songs, or even the James Bond theme!

Once the handover is completed, the duty Drummer advises the Director of Music, and the band moves to the Center Gates. The Old Guard then exits the Palace and marches to Wellington Barracks. Finally, the New Guard breaks into two detachments. One marches to St. James’s Palace, while those responsible for guarding Buckingham Palace assume their duties in the Palace Guard Room.

The Changing the Guard lasts about 45 minutes and takes place Monday, Wednesday, Friday, and Sunday at 11 am. In the summer the event takes place daily. It’s a free event, so it can get quite crowded in the summer months. Since the British weather is often wet, there are times the ceremony is called off at very short notice. So be aware that there may be a last-minute cancellation, especially in the spring.

Everyone should see the Changing of Guard at least once. You can watch this quintessentially British event on our 11 Days Highlights of England and Scotland tour and all other tours that include London. Contact us to learn more.