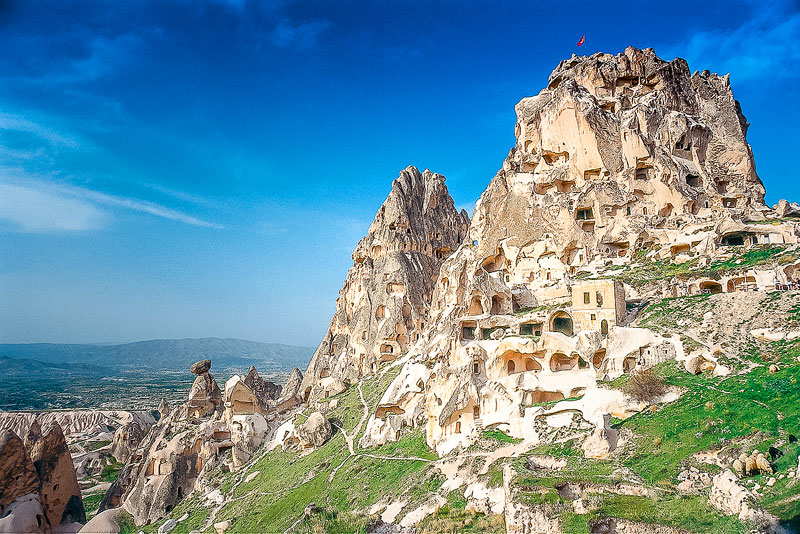 Cappadocia, with its a surreal landscape, honeycombed hills, and rock-carved churches is an essential stop in Turkey. Pictured: the rock castle Uchisar overlooking the Göreme Valley.

Cappadocia, in central Anatolia, Turkey, boasts some of the most stunning and surrealistic landscape in the world. Unusual honeycombed hills, “fairy chimneys,” distinctive rock-carved churches, and underground cave-cities mark the strange land forms that once housed large communities.

How Cappadocia Got its Unique Landscape

Your first impression of Cappadocia might be that it’s like on another planet. Thus, it’s no wonder the first thing visitors ask is how was the fantastical moonscape formed. Amazingly, it was sculpted solely by erosion. Several million years ago a volcanic eruption blanketed the region in ash, which eventually became soft rock. Over thousands of years, wind and water eroded the rocks and carried away the soil. As a result, the remaining conical rock structures formed the fantastic fairy chimneys, chapels, and dwellings we see today.

Who lived in Cappadocia

Starting with the Hittites, numerous empires ruled the region. Among them was Persia, Alexander the Great, Rome, the Byzantine Greeks, the Ottoman Empire, and finally Turkey. Today, tourists come to visit the spectacular Göreme Open-Air Museum with its beautifully painted rock churches and descend into one of the incredible underground cities. 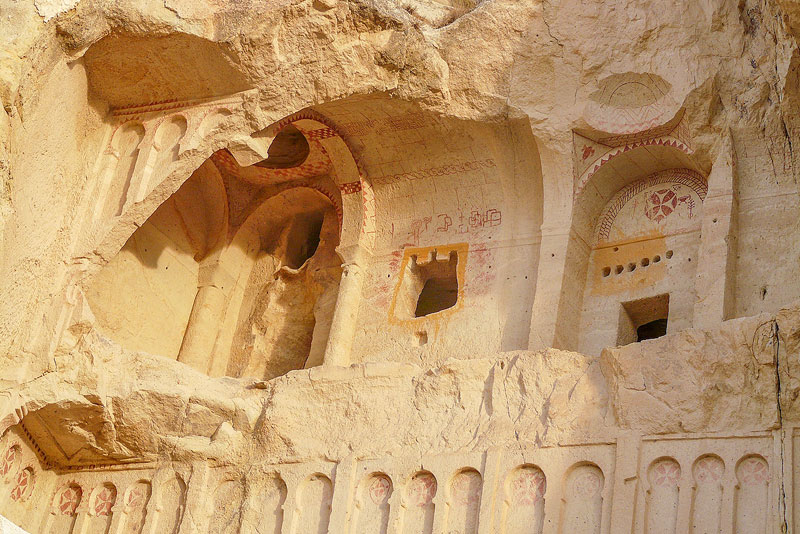 Göreme became a refuge for early Christians who were fleeing persecution. Notably, in 1 Peter 1:1, the Apostle notes Cappadocia was among the persecuted Christian communities of Asia Minor. By the 4th century, Byzantine monks settled there and began inhabiting the rock-hewn cells.

The monks richly decorated their rock churches with amazing frescoes of Byzantine and Christian history. Thus, Biblical scenes cover the walls and ceilings. Among the paintings is Jesus on the Cross, the Last Supper, the Transfiguration, and more. The Karanlik (Dark) Church is the most spectacular because it’s fully restored and the frescoes are just beautiful. For instance, it features frescoes of Mother Mary and the infant Jesus, Abraham, the Pantocrator Jesus (Eastern Orthodox depiction), and the four archangels. Now a UNESCO World Heritage treasure, Göreme has been a pilgrimage site since the 17th century. 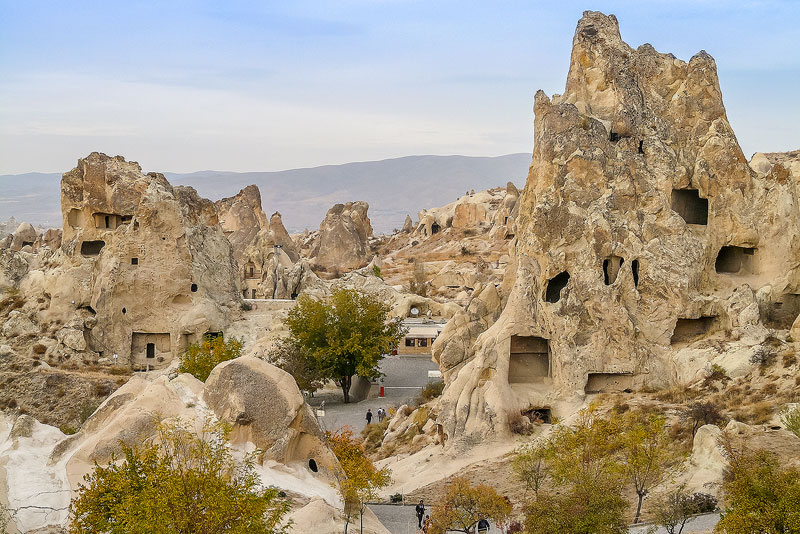 Göreme was an early Christian refuge in Cappadocia

Near Göreme is the underground city of Kaymakli. This is only one of perhaps 40 subterranean cities and 200 underground structures in Cappadocia, dating back to 1200 BC. Its inhabitants constructed their dwellings around a network of about 100 tunnels on eight levels. As a result, the underground city is quite spread out, with stables, churches, kitchens, bedrooms, wineries, cellars, tombs, and ventilation shafts. Your guide will bring the underground city to life as they describe how the inhabitants used the rooms and escaped through the tunnels to flee attackers. While the tunnels can be narrow, some of the rooms are quite large. Imagine: the inhabitants carved out this incredible labyrinth with hand tools, without electricity. 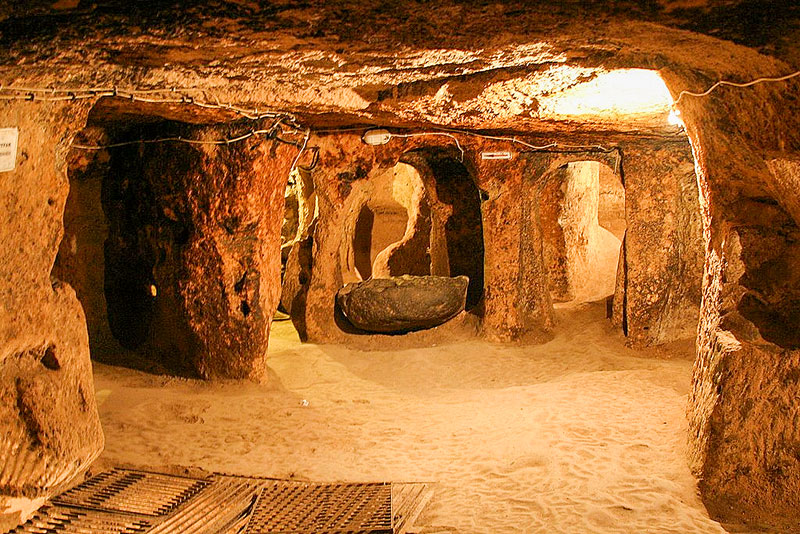 Another popular way to explore Cappadocia is via a hot air balloon. The Göreme Valley is known as one of the best places in the world for hot air ballooning. The flying conditions are generally excellent, and it’s quite an experience to gently drift over the fairy chimneys, orchards, and vineyards throughout the valley.

NAWAS features Cappadocia on its 12 Days Biblical Turkey Catholic Pilgrimage or Protestant program. Both include the Göreme Open Air Museum and Kaymakli Underground City, as well as the Zelve Open Air Museum and the quaint pottery village of Avanos. Contact us to learn more.