Visiting the House of the Virgin Mary

Visiting the House of the Virgin Mary Near Ephesus 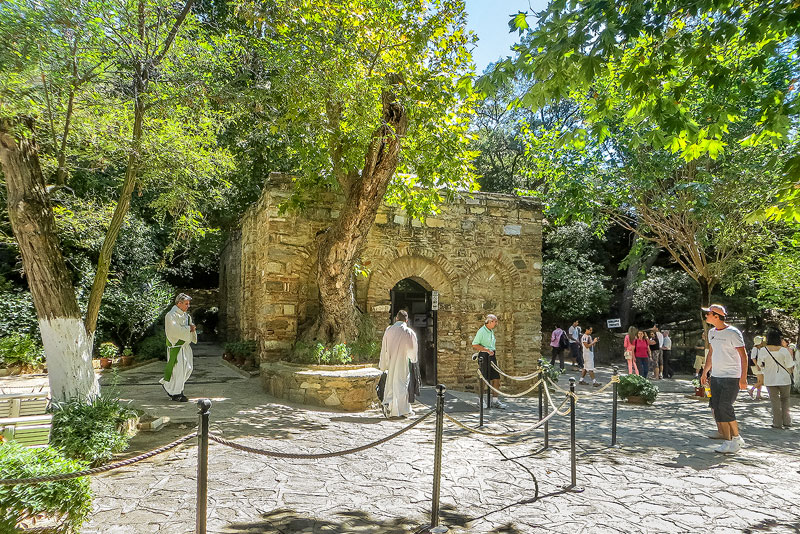 Pilgrims visiting the House of the Blessed Virgin Mary

Close to Ephesus’ Upper Gate atop Bülbül Dağı (Mt. Coressos) stands a large gold statue of the Blessed Virgin Mary. The striking statue greets pilgrims as they ascend the hill to the stone house where Mary is said to have spent her final days. According to Catholic tradition, Mary and St. John arrived in Ephesus together and she lived there until her Assumption. Today it’s a place of pilgrimage for nearly one million faithful each year. Most visit the House of the Virgin Mary during a tour of Ephesus.

A tiny chapel sits on the foundation of the ruins of the original house, which was discovered in 1881. The chapel is made entirely of stone in typical Roman architecture. Inside, you may light a candle in front of the altar. Outside, you’ll see the thousands of scraps of white paper or cloth the pilgrims use to leave prayers on a “wishing wall” below the chapel.

The faithful can join the daily Mass celebration at the small chapel, and every August 15, a solemn Mass commemorates the Blessed Mother’s Ascension. 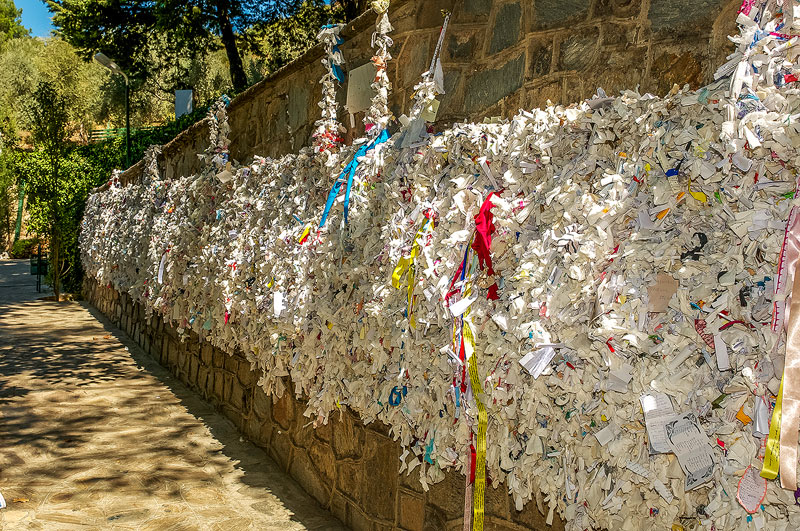 At the House of the Blessed Virgin Mary, leave your prayer or wish on the wish wall

A Holy Place and Catholic Place of Pilgrimage

Although the Catholic Church never officially recognized the house, in 1892 Archdiocese of Smyrna’s investigation concluded that it was scientifically and theologically justifiable and possible that Mary might have died there. A few years later, in 1896, annual pilgrimages began. Further cementing the status, in 1951 Pope Pius XII designated the House of the Virgin Mary a Holy Place and Catholic place of pilgrimage.

Papal Visits to the House of Mary

Since then, several Popes have made pilgrimages to Mary’s House. Most recently, Pope Francis visited the House of Mary on November 28, 2014, and Pope Benedict XVI came during his four-day trip to Turkey in 2006. In earlier decades, Pope John Paul II made a pilgrimage in 1979 and Pope Paul VI in 1967.

Visit Ancient Ephesus and House of the Virgin Mary

NAWAS’ Catholic Pilgrimages in Greece and the Greek Isles and Biblical Turkey include a visit to Ancient Ephesus and the House of the Virgin Mary. As with all our pilgrimages, you’ll have time for reflection. It’s a program highlight and something you won’t want to miss. Contact NAWAS to learn more about our Greece, Turkey, and Ephesus tours.