Visit the Rose-Red City of Petra

The magnificent Treasury at Petra

The treasured UNESCO Heritage Site city of Petra in western Jordan, where the ancient Nabataeans settled over 2,000 years ago, is a popular tour extension on Nawas’ Holy Land and Egypt programs. The narrow, winding gorge carved into the red rocks called a Siq opens magically onto the monumental Treasury, hewn from solid red sandstone. Thus it’s no wonder this ancient sandstone city of temples, tombs, palaces, and storerooms is Jordan’s greatest historical treasure and a world wonder. It’s a remarkable sight you won’t soon forget.

Likely constructed between the 3rd and the 1st centuries BC, Petra got the nickname “Rose-Red” City from the striking red-hued rock. Allegedly Herod the Great came from Petra and St. Paul studied here for several years. While Petra’s famed Treasury with its Hellenistic façade is the main attraction, there’s much more to this Nabatean city.

Most people are anxious to get to Petra’s Treasury, but the one-mile-long, twisting red rock Siq is one of Petra’s highlights. The Nabataeans carved a portion of it, but natural rock formations comprise the majority. In ancient times the Siq was the main entrance leading to the city of Petra. Many visitors who walk the Siq are tempted to rush through, but those who take some time will marvel at the narrow, vertical walls rising to 80 meters (262 ft) high. The corridor seems nearly to meet overhead before emerging spectacularly in front of the Treasury.

The iconic Treasury’s elaborately carved façade is magnificent, and Petra’s most impressive sight. In fact portions of Indiana Jones were filmed here. Chiseled from solid red sandstone rock, it stands 40 meters (131 ft) high. Its two levels are decorated with columns and intricate friezes and it boasts a classic Hellenistic roof line. An eagle, symbol of Nabataean and Greek male deity, tops the façade. Carved figures of Castor and Pollux, sons of Zeus in Greek mythology, flank the lower level. A massive doorway at the outer court leads inside to a 12 sq. meter inner chamber with a sanctuary at the back with an ablution basin for ritual washing. Alas, visitors can only view this chamber from the doorway.

The Treasury’s purpose is somewhat of a mystery. Most likely it was a temple or royal tomb. In fact, according to one popular theory, it was to serve as a tomb for Nabataean King Aretas III. The Treasury gets its name from the Bedouin belief that an Egyptian Pharaoh hid treasures in the giant stone urn in the center of the second level.

Tucked up in the hills, the Monastery is another famous monument of Petra. Its Hellenistic façade looks similar to the Treasury, but it’s much bigger. The Nabateans built it in the 3rd century BC as a tomb. The Monastery’s interior has crosses carved on the walls, and some believe it may have been used as a church during Byzantine times. 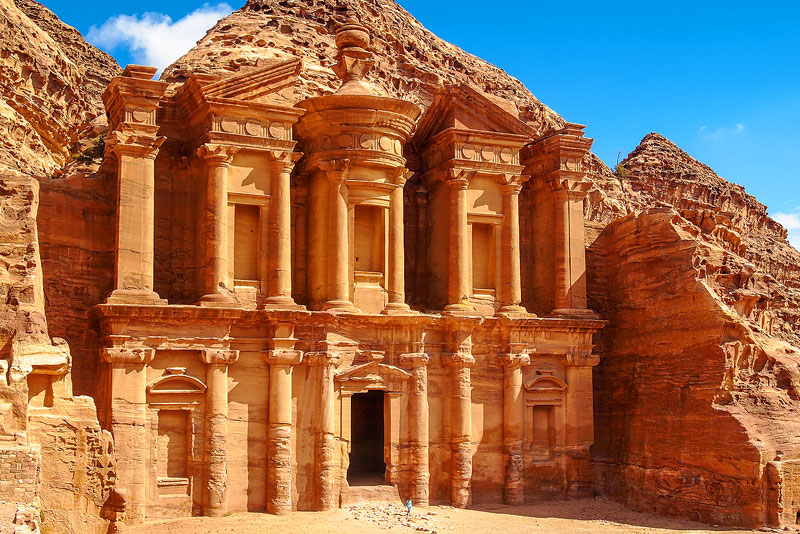 The Monastery at Petra is even bigger than the Treasury

There’s much more to the city of Petra. Besides the Treasury and Monastery, you’ll encounter the Street of Facades with more than 40 tombs, the 7,000-seat Theater, the Royal Tombs, and much more.

In addition to visiting the ancient city of Petra, NAWAS’ 3-day extension also includes visits to Jerash, one of the best-preserved Greco-Roman provincial cities in the world; Madaba with its landmark mosaic map of the Holy Land and Jerusalem from the 6th Century; Mt. Nebo where Moses viewed the Promised Land; and Jordan’s capital Amman. Learn more about our Holy land programs here and contact Nawas for details on how you can set off on the trip of a lifetime.