It was 100 years ago, on November 4, 2022 when after five years of searching, British archaeologist Howard Carter and his expedition uncovered a staircase buried in the desert sands in Egypt’s Valley of the Kings. The ancient steps led to King Tutankhamun’s tomb, undisturbed and largely intact for over 3,000 years.

The four-room tomb contained more than 5,000 splendid artifacts, including artwork, golden jewelry, paintings, statues, perfumes, and a stone sarcophagus containing three nested coffins. Inside the third coffin was the mummified body of Tutankhamun.

A Brief History of King Tut

Nicknamed “The Boy King” (Pharaoh), Tutankhamun assumed the throne at nine years old in 1333 BC. He only ruled for ten years before dying mysteriously at just 19 in 1323 BC. He was mummified and buried in a solid gold coffin with the now-iconic golden funerary mask in a tomb brimming with extraordinary treasures.

Valley of the Kings

The Valley of the Kings, just west of the Nile River, was part of the ancient city of Thebes in upper Egypt. Almost all the ancient pharaohs from about 1539–1075 BC were buried there. This desert valley contains over 60 royal tombs. Sadly, robbers cleaned out many of the tombs during antiquity. In addition, many valuable funerary items were removed and returned to the royal treasury during the 21st dynasty.

While the Golden King’s tomb may not be as large or complex as the nearby tomb of Ramses the Great, it was never looted or damaged by floods. This is what made its discovery so monumental. To this day, it’s regarded as one of the most important archaeological discoveries in the world.

Soon after Carter uncovered it, the tomb became Egypt’s most popular attraction, though today most artifacts are housed in Cairo’s Egyptian Museum of Antiquities and will soon be moved to the new Grand Egyptian Museum. 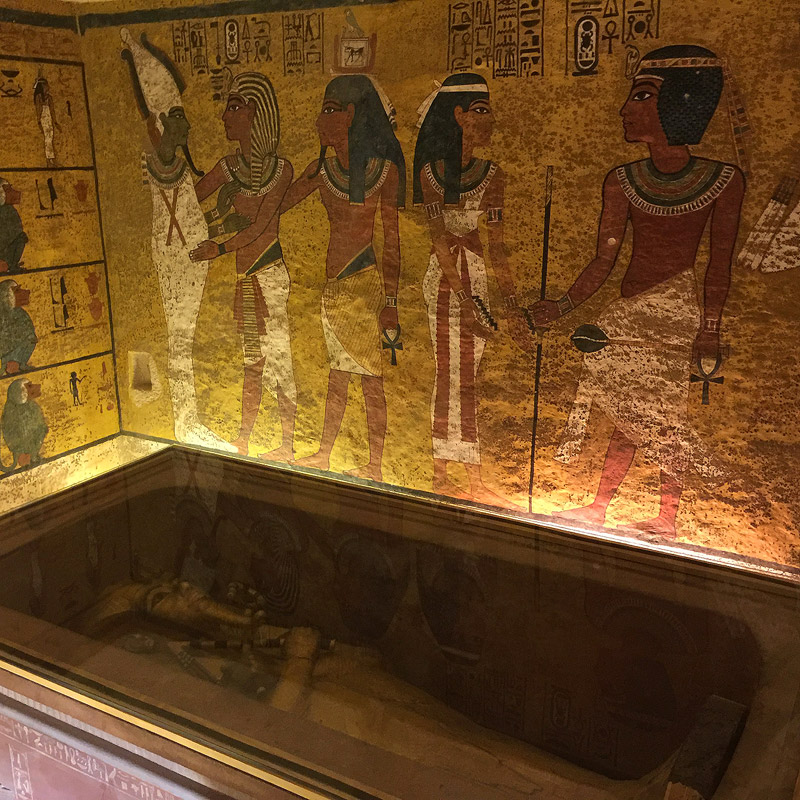 Mask from inside King Tut's tomb. Image courtesy of Wikipedia

Nawas travelers will see many treasures from King Tut’s tomb during their visit to Cairo. You’ll also visit the Land of the Pharaohs on a four-night Nile River cruise to Luxor, Edfu, Kom Ombo on our 11 Days Egypt and Great Nile Cruise. Contact us to learn more.